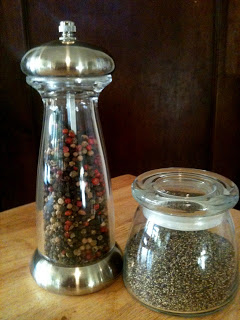 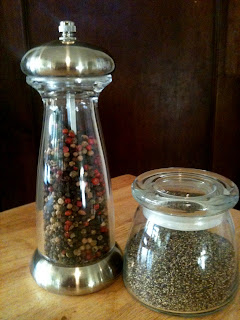 I know, it seems strange to some that I can actually ramble for an entire posting about pepper, but trust me, I can.  As I’m pondering what to blog about next, and focusing on my favorite herbs and spices, I have come to the conclusion that there are several I should probably own stock in (if that were even possible…I don’t recall PEPP being a choice on the little Dow ticker thingy) and pepper would definitely be one of them. I always remember “peppering” my food heavily, and I still can’t quite fathom my younger sister’s extreme aversion to pepper in food. I can even remember getting my first pepper mill (which is amusing because I really can’t remember getting my first car!)  And, even though they are typically used together, I rarely grab the salt shaker in conjunction with my pepper mill.  Not that I don’t like salt…I will chat about it at another time.  I just use salt in moderation, only as it’s needed in the recipe…but, I love the flavor of pepper in my food!  Like garlic, pepper can be found is several forms in my kitchen…fine and coarse ground black pepper, rainbow peppercorns in my pepper mill for table use, and peppercorns to be very coarsely ground using either my mortar and pestle or an electric spice grinder. 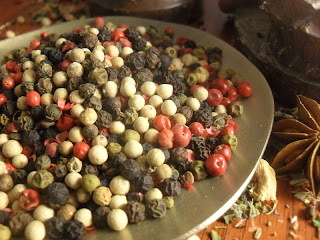 My motto for pepper is the same as my motto for bacon: everything’s better with pepper! (I’m certain those people closest to me are shocked that it has taken me three blog posts to mention bacon!) And, now that I have mentioned it, I am going to go fix some bacon…and pepper it heavily!

The luck o’ the Irish is pickling spice and peppercorns!

This site uses Akismet to reduce spam. Learn how your comment data is processed.