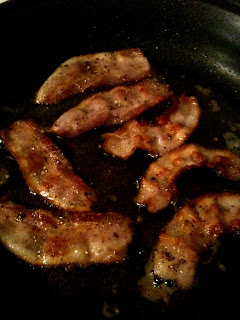 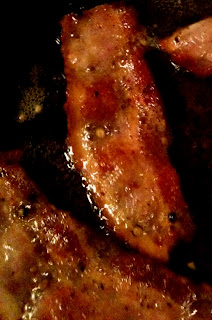 I’m here, I’m here!! Sorry for the delay…I’ve been slightly incapacitated.  We have a dog…a very large dog.  He’s actually still a puppy, but he’s a Mastiff so he’s double the size of most full grown large dogs.  He decided to have an adventure this week and pushed his way out the door.  In the process of catching him and encouraging him to return to the house, I injured my elbow…ouch! So, I was supposed to take it easy and not use the arm for a few days (yeah, right…I’m a mom!).  I’m snickering as I type this because he’s laying on the sofa he has claimed as his throne, snoring away…so sweet and innocent! 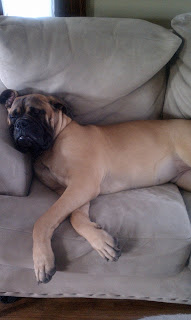 Okay, this is supposed to be a food blog, not a dog blog, but here’s something funny…the one last thing I was going to mention about peppercorns, before changing the topic, involves the dog! I mentioned in an earlier blog how surprised my friends and family were because it took several posts before I mentioned one of my true food loves: BACON!! Now, bacon itself is a wonderfully tasty treat, and probably the single reason why I could never become a vegetarian, but jazz it up with some fresh coarsely ground peppercorns and it’s even better!  How does this involve the dog?? Well, we don’t make a habit of feeding him people food, but on the weekends, he knows that mommy is going to be frying bacon.  He will walk over to his morning food, look at it, look at me, and then walk away from the food bowl and plop himself on the floor right in the middle of the kitchen waiting patiently for the sizzling bacon renderings to be poured over his food.  Then he feasts like the king he thinks he is!
Yes, you can purchase pepper bacon…some types more flavorful than others.  However, peppering it yourself puts you in control of the type of peppercorns, the freshness of the pepper and the quantity of pepper used.  Here are a few basic bacon tips: find a brand that you love and stick with it…surprisingly, that does not always mean the most expensive brand.  I love the thick cut bulk bacon from a local meat shop and I also love the store brand bulk packages from the grocery.  Cut the bacon in half (a tip I learned years ago from a friend’s mother) to make the pieces more manageable to cook and eat…they will lay better in the frying pan and not curl up as much.  Cook until perfectly tender-crisp…do this by adjusting the temperature you cook the bacon so that both the meat and the fat cook evenly.  Press the pieces flat and snip the fat curls to make them lay better.  Some people prefer to cook their bacon in the oven on a broiler pan so that the bacon fat drips away from the meat, and the bacon cooks flat and evenly.  Coarsely grind rainbow peppercorns and sprinkle generously over the bacon as it cooks. 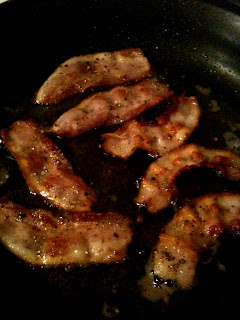 We all know that there are aspects of bacon that may not be real high on the healthful food attribute list.  American style bacon is made from a cut of fatty pig belly that is cured in a salt brine (sodium nitrates) and sometimes flavored with maple or brown sugar.  By cooking bacon until it is crisp, much of the fat is rendered out.  However, you should avoid cooking it at high temperature for long periods because the nitrates can turn to nitrosamine, known for negative health effects.  Okay, now I sound like a prescription medication commercial listing all of the negative side effects that have people wondering why they would ever take it!!  So, ignore most of that last paragraph and just EAT MORE BACON!!

Who is Reuben Anyway??

This site uses Akismet to reduce spam. Learn how your comment data is processed.